Literature and Theatre Professor Michael Cohen: 'Thinking deeply about literature makes you a better human being'

Michael Cohen, beloved professor in literature and author of the award-winning book The Eyes, talks about life in Bulgaria, his experience at AUBG and why he avioded teaching for as long as he could.

Tell us a bit about yourself – where did you grow up and where have you studied and worked?

I was born outside Los Angeles but grew up mostly in Madison, Wisconsin, where my father taught at the university. I studied Literature as an undergradutate at UW-River Falls and did my MFA in Creative Writing at Brown University.  As for work, if I listed all the jobs I’ve had it would take up quite a few column inches. Like most Americans of my generation, I’ve worked odd jobs since I was 13. I’ve done everything from shoe sales, to co-owning a chimney sweep business, delivering art work to museums and filthy rich people’s houses (including Leo DiCaprio’s and Christina Ricci’s), to working in a fish cannery in Alaska, to managing an arthouse cinema and running the projector for Godard and Satyajit Ray films. I hail from a long line of teachers and; I avoided teaching as long as I could. But there’s no dodging fate, thankfully. I feel extremely lucky to earn my crust the way I do.

What led you to AUBG?

My wife is Bulgarian and after graduating from Brown, we returned to Sofia on a Fulbright grant to translate Bulgarian Folk and Fairytales. That was a great year but as it neared it’s end, we were on the verge of having our second daughter and, in all honestly, I had no idea what the next life move might be after my Fulbright. Back to the U.S.?  Stay in Bulgaria and try to find work? Lo and behold, several positions in the Writing and Literature department at AUBG suddenly opened and I managed to land a job. I’ve never looked back.

What are your favorite teaching topics and research interests?

My favorite classes are the creative ones — fiction and screenwriting. But I derive a huge charge also from teaching the literature classes -- Introduction to Lit. and Counterculture literature, especially if the class gels and people get excited about what we’re reading. It’s a privelege to teach some of my favorite works of literature, and it’s especially gratifying when the texts connect with students on a deep level.  Research-wise, I’m all about my creative work which is constantly running, especially in the summer. When the fiction rolls well it feels like flying. On bad days, as a writer friend once said, it’s like chewing rocks.

What are some achievements in your professional field that you are especially proud of?

There are several. Among them, the awards I won for stories from F(r)iction and Mixer publishing were quite gratifying. Two writers I greatly respect and admire, Mercedes Yardely and Stephen Graham Jones, judged those contests, so that was quite sweet. I’m still proud of my first (hopefully not last) book, The Eyes. For the book I managed to land blurbs from two incredible writers, Brian Evenson and Robert Coover.  When I first read those blurbs in the publisher’s email, my heart pretty much exploded. I still get nice feedback on the book. Someone even wrote me something complimentary about it last week, which is cool. 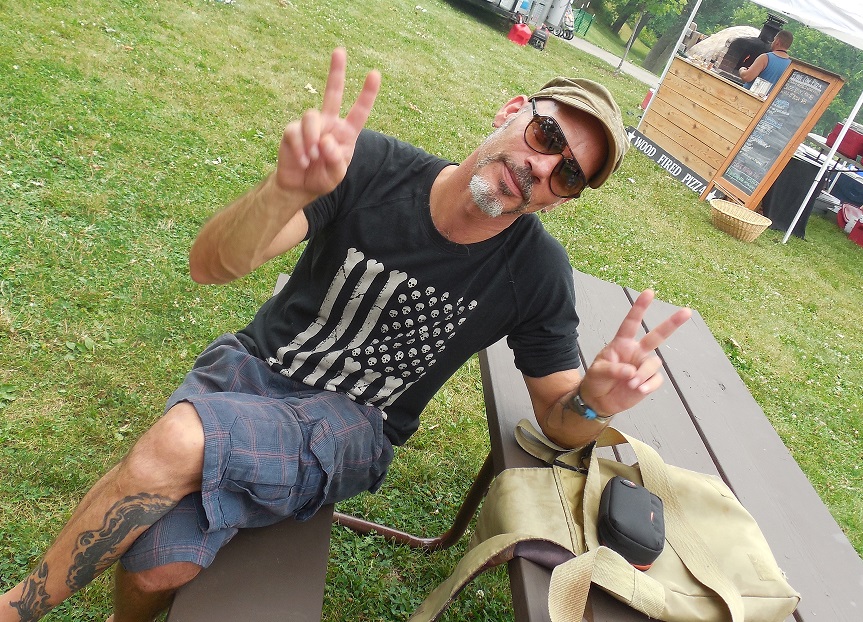 What are some traits that one can develop or gain thanks to majoring in Literature?

They’re numerous and, really, limitless for Literature students. You become a better writer, editor and thinker. What’s more, I honestly believe reading closely and thinking deeply about literature makes you a better human being — more empathetic and more insightful into the worldviews and motivations of others. I could go on and on, but I should also just say that reading and writing are simply two of the most sublime pleasures I know as a human.

If teaching was not your profession, what would have been?

I’d certainly still be a writer but it’s hard to imagine not teaching in some capacity. Despite years of resistance, it’s definitely in my blood. I suppose I might have worked as a fiction editor at a publishing house.  Alternately, I might have just opened a used bookstore, though that dream is near impossible in this day and age. Or maybe I would have just wound up selling pirate DVDs no one wants on some street corner somewhere.

Has AUBG helped you develop personally and professionally and in what ways?

It’s certainly made me a better teacher.  As for the writing, it’s a mixed bag.  It’s virtually impossible to get meaningul creative work done during the school year, as teaching also requires creative juice and it’s a matter of finitude. Still, early on in the renewal process I got a good push from one of my evaluations.  One of the FET members came into my office after I didn’t get promoted the first time round and said, “You’re great, your writing is great, just start publishing.” Writers/artists sometimes need a nudge if not an outright kick in the rear. That helped me take myself more seriously as a writer, something I’d lost momentum on with having the second child and getting on my feet with the teaching job.

The students who don’t care or make an effort are the most challenging, not to mention confusing. I don’t understand why someone would bother paying tuition to attend university, and then take a half-assed approach to it. Dig in to your time here, that’s what I say.  The real world is much more challenging vs. the academic womb.  Dive deep and make the most of it. Read everything. Push yourself further than you think you can go. When students do the latter, that’s the most rewarding part of the job for me. It’s incredible to see a student who has never written a story or a screenplay before turn out something brilliant. Those moments excite me and they give me hope for the future.

What has been your experience living and working in Blagoevgrad and Bulgaria?

Bulgaria is home and I love Blagoevgrad. My only complaint—the only think I miss from the States—is the lack of color, culture, and ethnic food. We lived in New York before returning to Bulgaria so, yes, sometimes Blago seems like a cultural desert. Still, it’s a good place to write.

What do you enjoy doing in your free time?

Aside from writing I’m obsessed with books and film. Summer is a time to catch up on reading and I still do that vorasciously—I need a whole life just to read.  I also dig playing poker, seeing good live music, hanging with family and friends and, of course, travelling. Though who knows when that will normalize. It’s a crazy time to be alive, but a fascinating one.  As the old curse goes, “May you live in interesting times.”  And we do.